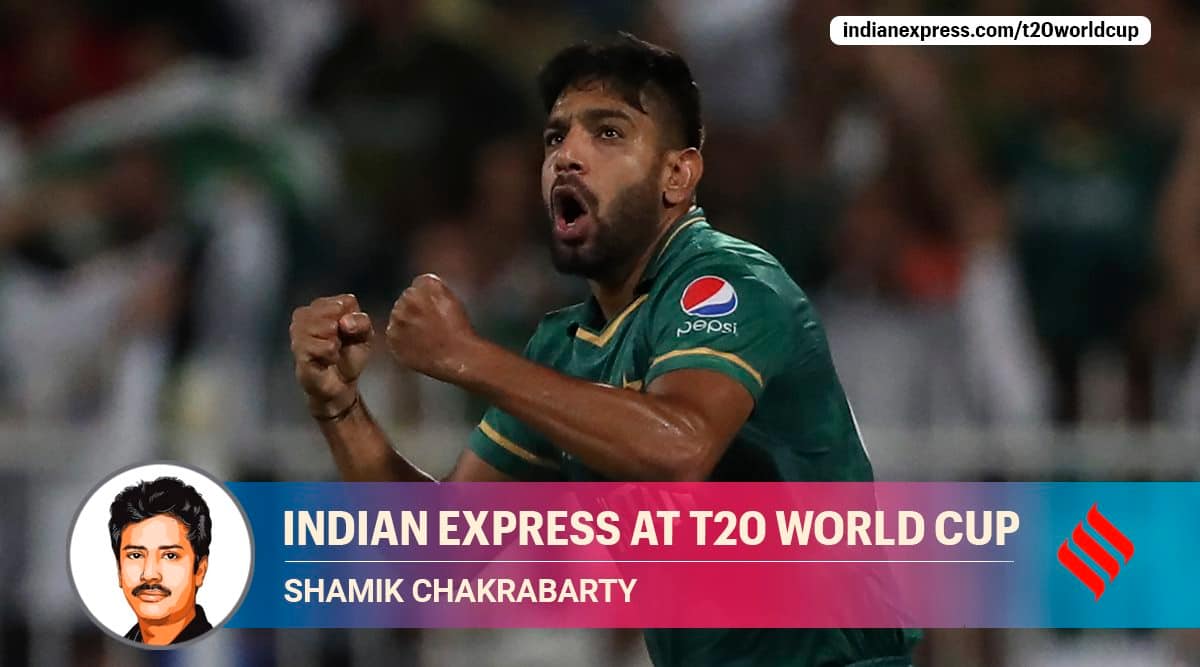 One afternoon almost five years ago, Haris Rauf’s life became meaningful. Tape-ball cricket had given him mohalla fame in Rawalpindi, but that was just about it. Haris’ talent deserved a bigger platform for it not to be laid to waste. That’s when Lahore Qalandars and Aaqib Javed came calling.

He broke through for being a mile faster than his nearest rival. “Lahore Qalandars ka trial tha aur Tarif bhai (a coach) speed gun leke khade huye the (it was a Lahore Qalandars trial and Tarif bhai was standing with a speed gun). Ek banda 87 mari, toh mein socha mere ko is se zyada tez dalna hai (someone bowled at 87 mph, so I thought I had to bowl quicker than him). Toh jab ball dala, speed gun 88 dikhaya (so when I bowled, the speed gun showed 88 mph). Tabhi mere ko next round jane ka mauka mila (only then did I get the pass to qualify for the next round),” Haris recounts.

But he wasn’t too eager to turn up. “Ek dost tha, woh bola jake dekhte hai, toh chala gaya (A friend told me, ‘let’s go and see what happens at the trial’ and hence I went).

His dismissal of New Zealand’s Martin Guptill at the T20 World Cup game in Sharjah on Tuesday had a bit of tape-ball trickery, the way the fast bowler cut down the angle and cramped the batsman. Here’s the lowdown from Aaqib, Haris’ mentor, on how it works.

“A tape-ball bowler develops the understanding of angles quickly. The lighter ball moves in the air a lot more compared to a cricket ball. And if a bowler can control the lighter ball, when he graduates to proper cricket and bowls with a cricket ball, control comes to him naturally.”

It’s not easy to capture the nuances of Urdu/Hindi via English translation; rags to riches would be closest to gumnami se shohrat. A young Haris worked as a salesman at a Rawalpindi shop besides playing tape-ball cricket. In 2016, when the last World T20 took place, he wasn’t even a professional cricketer. On a private trip to Gujranwala, he dropped in at the Lahore Qalandars trial and burst onto the Pakistan Super League by dint of his pace. Then, Dale Steyn got injured and Melbourne Stars in the Big Bash League called him. The 27-year-old has been on a steady rise since.

“My father didn’t like cricket. He said without recommendation, you weren’t going to make a career. Then I got picked for Lahore Qalandars, where talent rather than recommendation has been the only yardstick,” Haris had said back in 2017, after being picked by the Pakistan Super League franchise. On Tuesday, after winning the Man of the Match award against New Zealand, he went back to his roots: “I just want to thank Lahore Qalandars.”

A Twitter post followed, tagging a selfie taken by teammate Shaheen Shah Afridi at the ground… “Team Green effectively lived up to the expectations of the resilient nation & secured a thrashing victory against the black caps in the most adrenaline-inducing game of cricket. Very happy to be awarded with MO D Match in a crucial WC game.”

Pakistan owes its never-ending pace bowling supply to tape-ball cricket and there’s a reason why, unlike tennis-ball cricket, this variety of the game produces quicker bowlers. “If one has to compare playing with a regular tennis ball as opposed to a tape-ball, you would notice that due to the fuzzy exterior of the tennis ball, which inhibits speed while in motion, it moves relatively slower.

“However, while playing with a tape-ball, such external barriers are removed and the ball glides at a faster pace when in motion. Practising with tape-balls from a young age encourages bowlers to develop motor movements that aid in achieving prime speed,” Aaqib explains.

The former Pakistan pacer and Lahore Qalandars director of cricket opens up on Haris’ development. “The kid worked his socks off. For two years, he didn’t even go back to his place. Technical coaching aside, it was a challenge to get him into the groove, a boy who hardly understood the system at this level. His hard work has paid off.”

Jo wada kiya woh nibhana padega (fulfil the promise)– somewhere Mohammad Rafi creates a connection in the Haris-Aaqib relationship. The coach asked his ward to change his diet, increase weight and become stronger. It’s a sort of give and take; if you promise you will follow the routine, I promise that I will take care of your progress. Both took a vow and walked the talk.

Last year, Haris claimed his second hat-trick in the BBL playing for Melbourne Stars, the only bowler apart from Rashid Khan to achieve the feat in the tournament. Matthew Gilkes, Callum Ferguson and Daniel Sams of Sydney Thunder were at the receiving end of Haris’ thunderbolts. His celebration was a runabout, not the slit-throat gesture of an earlier vintage. The brashness of youth was uncalled for and disrespectful. A proper dressing-down from Aaqib duly followed.

Haris changed for the better, maybe taking the course correction a little too far. At the 2020 PSL, he apologised to Multan Sultans’ Shahid Afridi after bowling him out. “He is going through a learning curve. He is grooming well, respecting his seniors. It’s imperative to grow not only as a cricketer but as a human being as well. I feel good when I see his development,” Aaqib says.

A month ago, after New Zealand abruptly cancelled their Pakistan tour acting on a security alert, Haris, like all his colleagues, took offence. Words like “meddling vested interests” and “wrong precedents” appeared on his timeline. Quietly but assuredly, Pakistan are playing to prove a point at the ongoing T20 World Cup. “We will rise & shine again,” Haris had written. The fast bowler is contributing to his team’s cause.