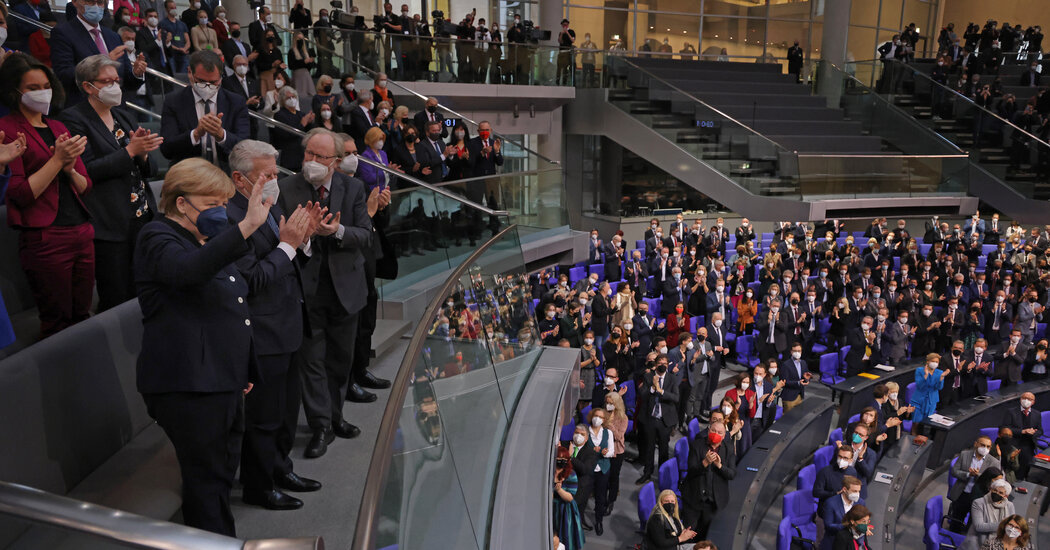 
BERLIN — It was vintage Angela Merkel: The woman who has dominated European politics for the better part of two decades handed over her office to the next German chancellor, thanked her staff, then walked to the door and made an exit — her final one.

After 16 years as leader of Germany and unofficial leader of Europe, Ms. Merkel on Wednesday left the office she first took over when President George W. Bush was still in the White House in a characteristically understated way.

“Congratulations dear Mr. Chancellor, dear Olaf Scholz,” Ms. Merkel told her successor in a small gathering at the chancellery. “I know from my own experience that it is a moving moment to be elected into this office.”

“It is an exciting, fulfilling duty, a challenging duty, too,” Ms. Merkel said, “but if you embrace it with joy it is perhaps one of the most beautiful duties there are to be responsible for this country.”

Long the world’s most powerful female leader, Ms. Merkel was the central political figure in Germany and Europe through four U.S. presidents and five British and eight Italian prime ministers. Her steady accretion of authority drew admirers and detractors alike, but she remained a singular source of stability for the continent through repeated crises.

Criticized for having failed to groom a successor, Ms. Merkel, a Christian Democrat, may well have done so in the end. Only — much to the frustration of her own party — it was a member of her traditional opposition, Mr. Scholz, a Social Democrat and her last finance minister, who was sworn in Wednesday after a campaign that promised continuity.

Still, Ms. Merkel’s departure marks the end of a dominant era of German politics that she herself called “eventful and often very challenging” — and the beginning of a new and uncertain chapter for Germany and Europe.

“It was a big period during which you were chancellor of this country and you did big things,” Mr. Scholz said after she had formally handed over the chancellery and its staff to him. “There were some big crises we had to deal with, some of them we weathered together.”

“That welded us together and not just these events,” Mr. Scholz added. “Between us there was always very trusting collaboration. That is good, I believe, because it shows that we are a strong, capable democracy in which there is a lot of consensus between democrats, cooperation.”

Many who worked closely with the departing German chancellor point to her sense of dedication and willingness to compromise as the basis for her power.

“She was — and she is — the person who was always going in deeply prepared, with a deep sense of responsibility, always looking for the result,” said Dalia Grybauskaite, who first met Ms. Merkel in Brussels in 2005 and went on to collaborate with her during her own decade-long term as president of Lithuania. “And she was ready to compromise to achieve that result.”

The full imprint that Ms. Merkel, a pastor’s daughter from the former communist East, made on her country and continent will reveal itself only in the years ahead. But for now the fulcrum of her legacy is widely considered to be her decision in 2015 and 2016 to welcome more than a million asylum seekers into Germany.

The decision sharply divided her country — particularly along the old East-West fault line — and fueled the emergence of a far-right nationalist movement that grew stronger than at any time since the Nazis.

But it also softened Germany’s image abroad and established her country as a liberal beacon as populism threatened the very foundations of the West’s democratic order.

“Angela Merkel changed Germany’s image in the world — in a way she saved Germany’s honor,” said Naika Foroutan, an immigration expert and professor at the Humboldt University in Berlin. “It went against all expectations that this explicit humanitarian gesture would come from Germany. That symbolic turn, that Germany, the country with the ugly face, proved the rock and took people in, is associated with Angela Merkel.”

The other period that defined her time in power was Europe’s debt crisis, and her tightfisted prescription for long years of painful budget cuts as a way out of it — something many southern Europeans still have not forgiven her for more than a decade later.

“In parts of Europe Ms. Merkel is seen much more negatively than in other parts of the world,” Ms. Foroutan said.

The same is true in Germany itself: Wildly popular in the far more populous West of the country, Ms. Merkel is hated in swathes of the former Communist East, where she grew up. The East has become the stronghold of the Alternative for Germany, a party created on her watch and the first far-right party to have made it into the German Parliament since World War II.

“I know my face is polarizing,” Ms. Merkel conceded two years ago in the eastern city of Chemnitz after it became the scene of violent far-right riots. Toward the end of her time in office, protesters would hold weekly vigils outside the chancellery and show up to public events she attended to shout “Merkel must go!”

At the time, her approval ratings were dropping fast and it looked like she might not make it politically through her full fourth term. It was the pandemic that gave Ms. Merkel, a trained scientist of famously calm temperament, another honeymoon in the opinion polls.

Mr. Scholz, who was her finance minister during the last four years, has a very similar temperament and capitalized on the parallels. “Not that much will change,” he told the staff in the chancellery on Wednesday.

“The transition from Merkel to Scholz is so harmonious that you’ve got to ask: What is it between those two?” the newspaper Süddeutsche Zeitung posited in a recent article. “Merkel was often accused of failing to cultivate a successor. But maybe that isn’t true.”

The post-Merkel era begins. For the first time in 16 years, Germany has a center-left government and a new chancellor, Olaf Scholz, whose job will be to fill the shoes of Angela Merkel. Here’s what to know about the new government:

Who is Olaf Scholz? A lifelong Social Democrat, Mr. Scholz, 63, has been a familiar face in German politics and served in two governments led by Ms. Merkel’s Christian Democratic Party, most recently as her finance minister. But he has also been something of a political chameleon.

An uncommon coalition. The new government led by Mr. Scholz brings together three parties — the Social Democrats, the environmentalist Greens and the pro-business Free Democrats. It is the first time since the 1950s that three partners have formed a government.

The governing deal. Despite their differences, the parties said they had found enough common ground to push forward with plans to beat back the pandemic, increase the minimum wage, address climate change and legalize marijuana.

The pandemic offers a crucial test. A spike in cases has thrust Germany into its worst crisis of the pandemic, vaulting the issue to the top of the coalition’s agenda. But in its first test, the incoming government sent mixed signals before the latest wave forced a retreat to tougher measures.

Foreign policy crises await. Rarely has a German leader come into office with so many burning crises. Mr. Scholz will have to deal with tensions on the Polish-Belarusian border, a Russian president mobilizing troops near Ukraine, a more confrontational China and a less dependable U.S.

Much to her own party’s irritation, Ms. Merkel said that she would “sleep tight at night” knowing that Mr. Scholz was running the country. She invited Mr. Scholz to accompany her to a Group of 20 meeting in Rome in October to introduce him to leaders like President Biden. She has involved him in every major decision since the election two months ago. Last the two jointly presided over a Covid emergency meeting with the governors of Germany’s 16 states.

During a military farewell ceremony for Ms. Merkel last week, she wished Mr. Scholz — whom she called “Dear Olaf” — “all the best and a lucky hand and much success.” He promptly replied with a compliment of his own. “Angela Merkel was a successful chancellor,” he said the same night on Twitter. “She tirelessly stood up for her country and during 16 years in which a lot changed, stayed true to herself.”

Many Germans expressed pride in how smoothly Ms. Merkel handled the transition, drawing direct comparisons to the refusal of former President Donald J. Trump and his supporters to recognize the election of Mr. Biden.

“We are witnessing a very good democratic transition where there is a basic consensus,” said Christoph Heusgen, Ms. Merkel’s former chief foreign policy adviser, who this week took over the presidency of the Munich Security Conference. “I am a little proud of our democracy the way it’s managed this transition without schadenfreude, without hatred, without malice.”

Earlier on Wednesday, Ms. Merkel had watched from the visitor’s gallery in Parliament — where her own family had sat four times to watch her sworn in — as lawmakers voted Mr. Scholz into office. She got a standing ovation from the chamber, before quietly slipping out a back door.

From the moment she took the oath of office in 2005, Ms. Merkel embodied a string of firsts — first chancellor born after World War II, first to hail from the former East, first woman. Now she has also made history becoming the first modern chancellor to leave office, not by losing an election or a parliamentary vote, but by deciding she had served long enough.

One of the people who has most closely documented Ms. Merkel’s political career is Herlinde Koelbl, a photographer who began taking her portrait in 1991, just after she had come into office as minister for families and children under Chancellor Helmut Kohl.

In an early interview she gave to Ms. Koelbl, the outgoing chancellor insisted she wanted to “find the right time to quit politics.” At 67 she is more than a decade younger than President Biden and, after a self-imposed period of rest and reflection, can be expected to refocus her energies on promoting ideals and ideas she championed while in office, from global public health to development in Africa.

But comparing Ms. Koelbl’s most recent photos to those of the young Merkel, the toll of 16 years at the help of Europe’s largest economy are visible. Gone is the open, curious gaze, replaced by a more distant, skeptical look.

“In the beginning, she had very lively eyes,” Ms. Koelbl said, “and now she looks at you, but the liveliness is gone. The glow disappeared in her eyes.”

On Wednesday, as she left the handover ceremony in the chancellery, Ms. Merkel appeared relaxed, happy even. Walking to the door, she turned to Mr. Scholz.

Reporting was contributed by Christopher F. Schuetze in Berlin and Alex Marshall in London.