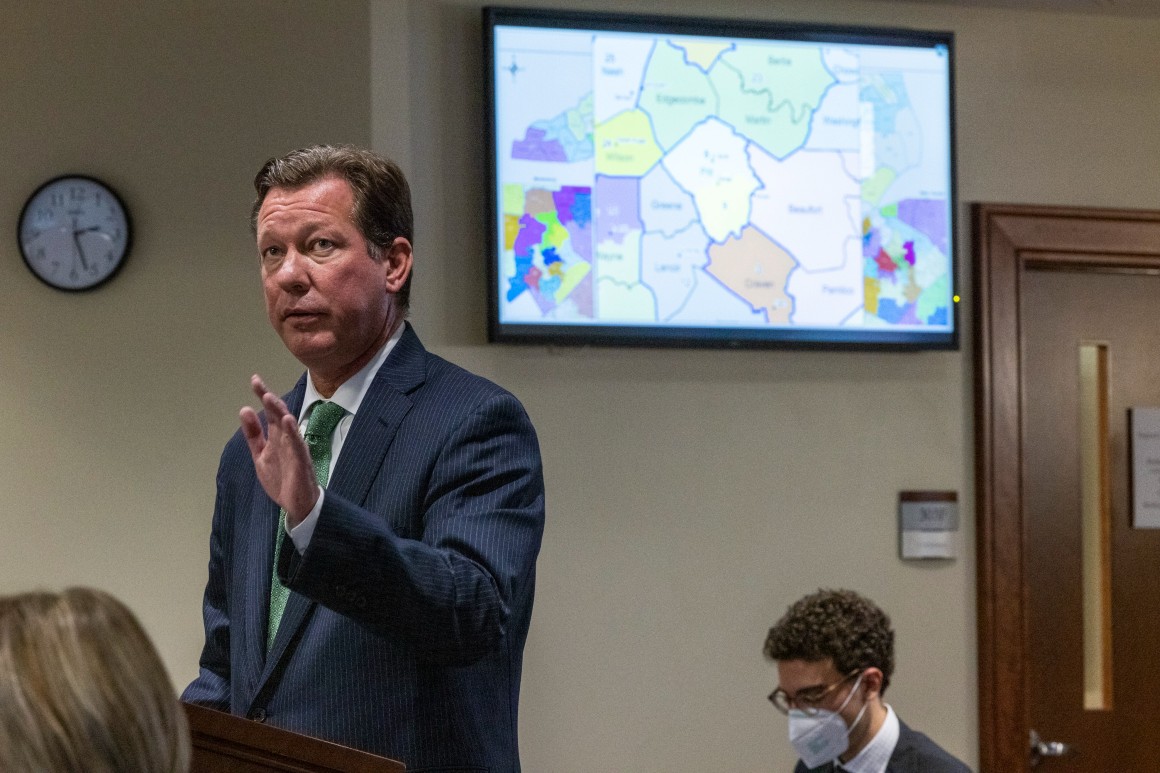 “Were we as a Court to insert ourselves in the manner requested, we would be usurping the political power and prerogatives of an equal branch of government,” wrote Superior Court Judges Graham Shirley, Nathaniel Poovey and Dawn Layton. “Once we embark on that slippery slope, there would be no corner of legislative or executive power that we could not reach.”

The ruling highlights the limits of anti-gerrymandering lawsuits as the country redraws its political maps, after the Supreme Court ruled last decade that federal judges shouldn’t police partisan gerrymandering. But Democrats are still pursuing that strategy in some state courts, like North Carolina’s, after successfully overturning maps in several states in recent years.

Read all coverage of the 2021 redistricting process

GOP state legislators passed a redistricting plan in the fall that could leave Democrats with as few as three of the state’s 14 congressional seats, prompting a lawsuit from liberal groups that worked its way through the state’s legal system. In December, the state Supreme Court froze candidate filing and pushed the primaries back two months to May 17 to accommodate the challenge, and it told lower courts to rule on the case by mid-January.

Candidate filing will now resume on Feb. 24, per the ruling.

The Superior Court’s decision to leave the map in place was one that some Democrats expected. The panel was chosen by state Supreme Court Chief Justice Paul Newby, a Republican. But Democrats control four of the seven seats on the North Carolina Supreme Court and can challenge the decision there.

“We will appeal to the North Carolina Supreme Court. The fight for fair districts continues,” Democratic election lawyer Marc Elias wrote on Twitter minutes after the decision was released.

Democrats are eager to secure a more favorable landscape in North Carolina to aid their uphill bid to keep the House majority in 2022.

And there’s some reason for them to be hopeful.

The state Supreme Court justices already signaled their openness to tossing out the map in December when they overturned a state appellate court ruling that candidate filing did not need to be paused while the lawsuit was considered.

Redistricting whiplash is nothing new in North Carolina, which has twice seen its congressional map thrown out by court orders.

Under the current configuration, Democrats could control just three districts in Charlotte and the Research Triangle. Meanwhile, Democratic Rep. G.K. Butterfield’s district in the northeast corner of the state became more competitive and ripe for a GOP takeover. And freshman Rep. Kathy Manning, a Democrat who won election in 2020 on a court-ordered map that united Greensboro, would be doomed.

But nearly all the other seats in the current congressional map are ones that Trump would have carried by at least 10 points at the presidential level in 2020, except for two that he carried by slightly less.

A reset of the map could yield Democrats several more pickup opportunities in the state and underscore the importance of state courts for their hopes of remaining in power. Democrats invested heavily in contests for the North Carolina state Supreme Court in recent years to claim and maintain control. The justices ruled in their favor in a 2020 suit and now may do so again, two years later.

Democrats are also asking state Supreme Court justices to invalidate a new GOP-drawn congressional map in Ohio, where they could be limited to just two seats out of 15 under the current proposal.