UP Polls: Will the Exodus of Leaders Hurt the BJP, Or Can It Still Count on Its Caste Arithmetic? 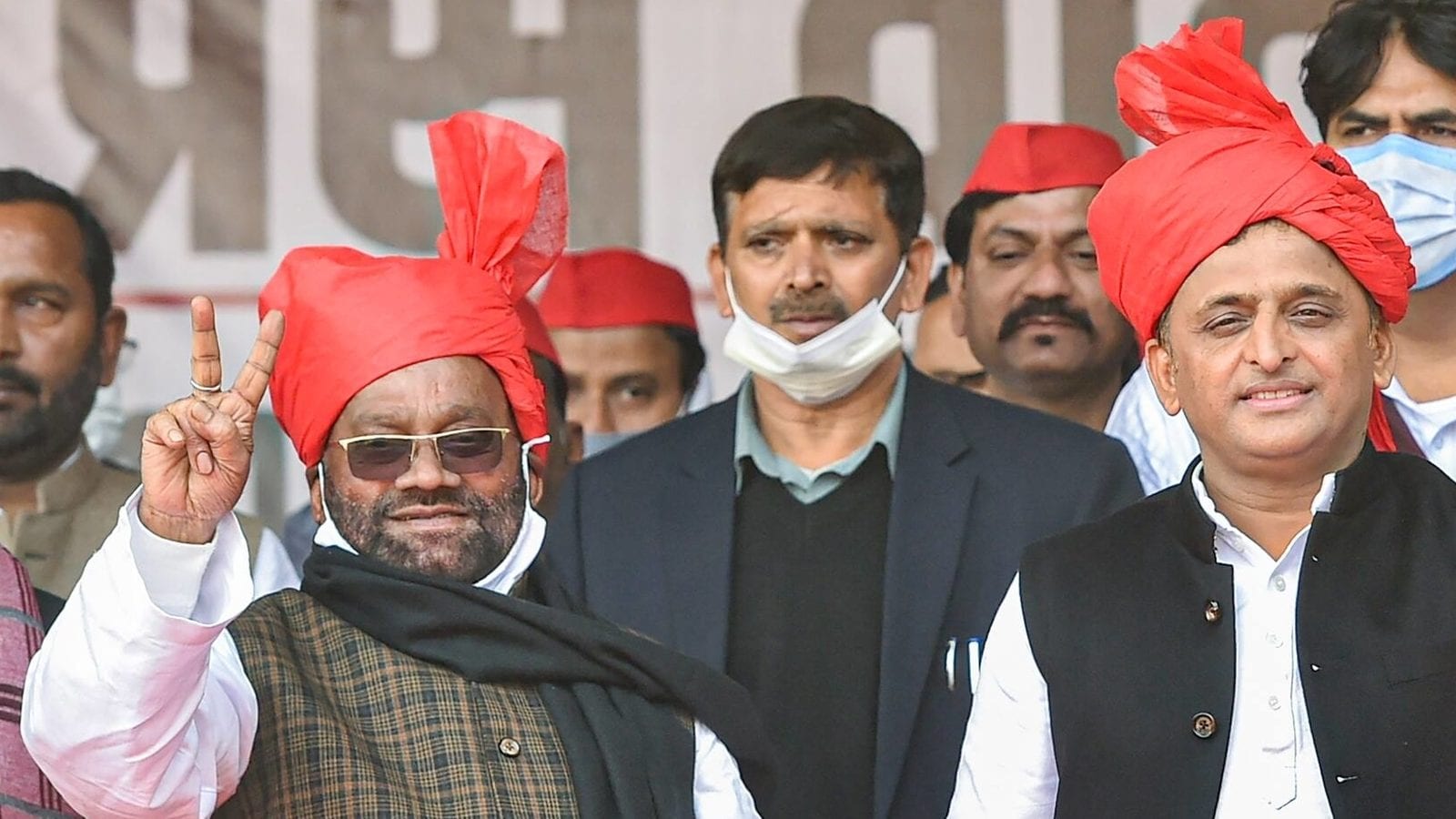 
Three Uttar Pradesh ministers and 11 MLAs have quit the Bharatiya Janata Party. Most of them are ‘other backward class’ (OBC) leaders. Swami Prasad Maurya, a former minister, is said to have a good hold on Maurya, Kushwaha, Shakya and Saini votes of the state. Another minister who resigned from the BJP is Dara Singh Chauhan. He is from the backward Lohia-Chauhan caste. The third is Dharam Singh Saini, a Bahujan Samaj Party leader who joined the BJP along with Swami Prasad Maurya in 2016. They all, after serving a full five years, now complain that the BJP is ignoring OBCs, Dalits farmers, youth, and other deprived sections.

They all are party hoppers, changing teams before elections. Maurya was BSP’s OBC face who joined the BJP in 2016 ahead of assembly elections. It is alleged he left both the BSP and BJP because his son and daughter could not get poll tickets. Mayawati had said in 2016 that they were denied tickets for the seats they were lobbying for, while BJP this time could not accommodate Maurya’s son.

Dara Singh Chauhan was first in the BSP. Then he went to the Samajwadi Party. He came back to the BSP and then joined the BJP in 2015. Saini is not a different story.

Their jumping political ships can be seen as more of political opportunism. The appeal of such party hoppers is limited. They are not expected to be big vote pullers across the caste lines in a decisive election like assembly or parliamentary, a fact that this article will later explain.

But on the other hand, the main factor is the social realignment done by the BJP in Uttar Pradesh that these party-hopping netas would find hard to disturb.

BJP’s social realignment in UP

Let’s go through the voting preferences of different castes in the state in the last four elections since 2012. The BJP came third in the 2012 assembly polls but registered stunning wins through the 2014 and 2019 Lok Sabha elections and the 2017 assembly elections.

We see a trend of consolidation in the BJP’s favour – election after election – since the last three big polls.

Now let’s compare these to community-wise voting preferences of the 2012 UP assembly elections. The polls saw the Samajwadi Party winning a comfortable majority and forming the government under Akhilesh Yadav. The SP won 224 seats in the 403-member assembly. The BSP was second, winning 80, while the BJP that has been a central force in the power corridors in Uttar Pradesh since the 2014 Lok Sabha elections, could win just 47 seats.

This reflects in the voting patterns of different communities. Called a party of traditionally upper caste voters, the BJP could not secure votes even from them. Just 38% Brahmins, 29% Rajputs, 42% Vaishyas, 17% other upper castes, 7% Jats, 20% Kurmi-Koeri and 17% non-Yadav OBCs picked it, as reflected by CSDS post-poll analysis.

But from the 2012 assembly election to the 2014 Lok Sabha polls, we see a quantum jump in the BJP’s prospects and performance.

What were the reasons?

It was all due to the social realignment done by the BJP—combined with its nationalist and Hindutva agenda—and development promises carried by development-oriented PM candidate and Gujarat chief minister Narendra Modi, who decided to make Varanasi in Uttar Pradesh his political base not just for the state but for the whole country. Add to it the 2013 Muzaffarnagar communal riots in UP and anti-incumbency against the-then government and the perfect ingredients were all ready, just waiting to be thrown into the mix.

Before the BJP’s re-emergence in Uttar Pradesh, the state saw two caste-based political parties forming governments. The SP had the Muslim-Yadav combine as its core vote bank while the BSP was a Jatav Dalit party. The BJP decided to take along the non-Yadav, non-Jatav population base in its fold, particularly the non-Yadav OBC vote bank, because of its larger numerical size. OBCs are around 45% of the state’s population and the BJP’s tallest leader and its PM candidate Narendra Modi, being an OBC, was the perfect beginning point.

Non-Yadav OBCs are around 35% of the population of the state. Combined with the BJP’s traditional vote bank of upper castes and the trading community, it was a winning formula. The BJP’s style of politics, agenda and campaign was aimed at realising this potential. The party knew the importance of this winning combination – a victory in Uttar Pradesh with 80 Lok Sabha seats means winning the general election of India and results of polls since 2014 prove that the BJP was successful in its social realignment efforts in the state. When compared with regional parties of the state, non-Yadav OBC voters saw a broader appeal in the promise, prospects and campaign of national party BJP led by Narendra Modi.

But a large section of the population of the state was not happy even with Akhilesh Yadav’s government as indicated by the next elections. They were looking for an alternative and found signs of it in Narendra Modi and BJP’s campaign and style of politics. Going with the larger national sentiment, they put in their trust behind Narendra Modi’s campaign of development with nationalism though Akhilesh Yadav had not completed even half of his CM tenure, and their displeasure with the SP government can be understood from the fact that out of 80, the BJP and its ally won 73 Lok Sabha seats in the state.

The BJP could write a different line of electoral politics in a state ridden by years of caste politics, and the 2017 assembly elections saw an even greater reversal than the 2007 and 2012 assembly elections. Like 2014, people of the state, across the caste lines, again supported the BJP’s campaign led by Modi. Against all calculations, the BJP went on to win 312 seats against the incumbent SP’s 47. It reflected again in the 2019 Lok Sabha elections when the BJP and its allies, though winning 9 seats less or 64 in total, crossed the 50% vote-share mark while the SP remained restricted to just five seats like 2014.

The BJP has been able to effectively weave social realignment in Uttar Pradesh – getting support from upper castes, non-Yadav OBCs and non-Jatav Dalits – with its development-oriented Hindutva nationalist politics and it is going to be very difficult for rival parties to break it just on the basis of some leaders jumping ship.

And this is proved even by previous election results. Swami Prasad Maurya and many other OBC leaders joined the BJP in 2016. In the 2014 Lok Sabha polls, the BJP got 53% Kurmi-Koeri and 60% other OBC votes. But 2017 didn’t see a greater change in spite of those big OBC names. That year, the party got just 6% higher or 59% Kurmi-Keori votes and just 2% higher or 62% other OBC votes, as per CSDS post-poll analysis.

The non-Yadav OBC voters believed in the promises made by the BJP and not in some turncoats and the 2019 Lok Sabha election result in Uttar Pradesh further proves it. A greater chunk of non-Yadav OBC voters decided to go with the party they had voted for in 2017. CSDS post-poll analysis says 80% Kurmi-Koeri and 72% other non-Yadav voters picked the party. Couple that with Yadav voters: even 23% Yadavs voted for the BJP, a 13% jump from the 2017 assembly elections.

If the February-March assembly election results in the BJP losing its vote share and seats, it is expected to be more on the lines of what we saw in 2012 and the previous assembly polls, i.e., the party losing its support across the caste lines and not just only OBC votes. If the BJP is going to fail in the next election, the main decisive factor will be anti-incumbency that will cause its social realignment efforts to collapse along the caste lines, be it upper castes or lower castes, and not just OBCs.