Rude Food by Vir Sanghvi: The new flavours of India 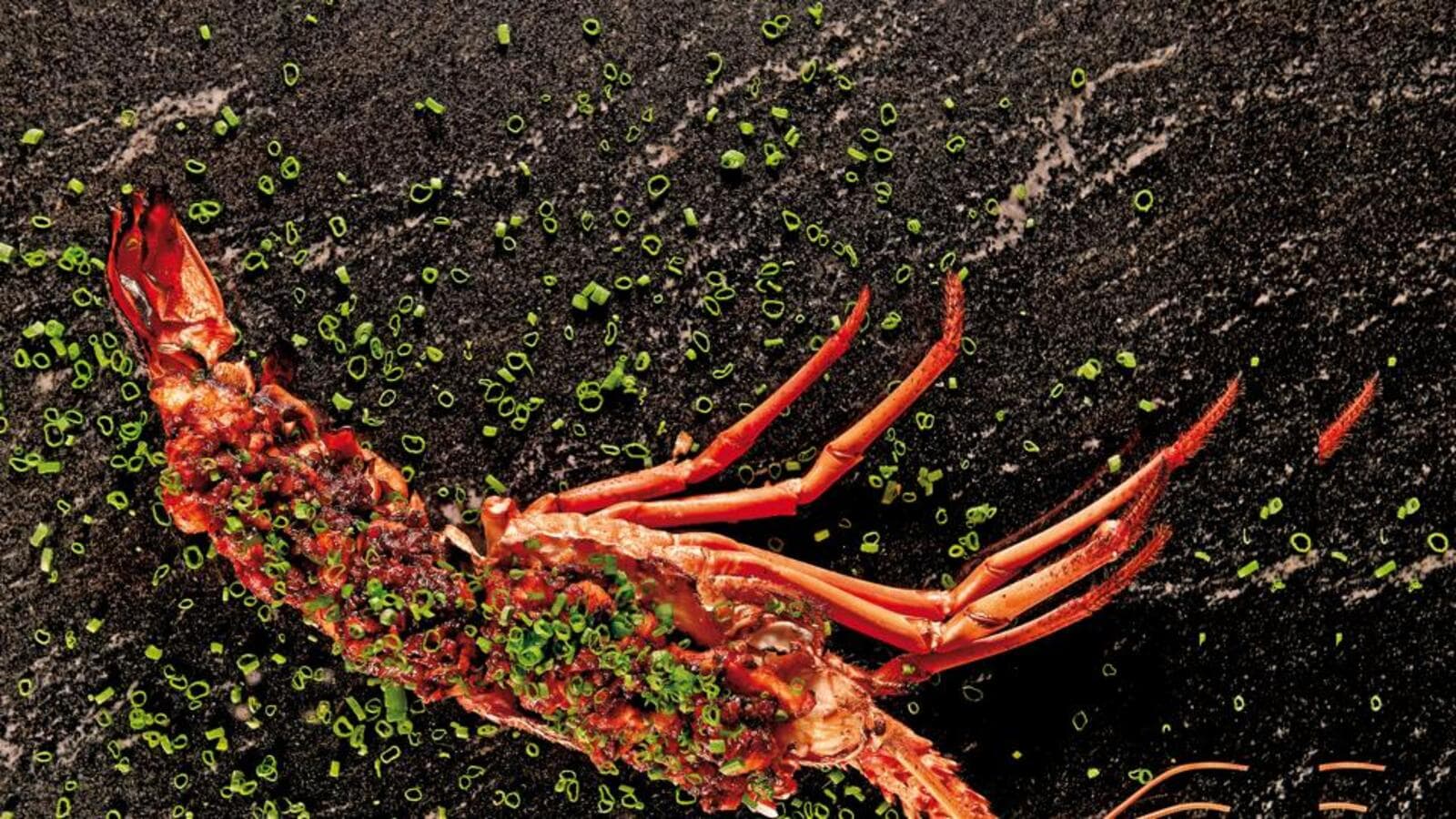 
A couple of months ago, Saurabh Udinia had an idea. As chef at Singapore’s super-hot Revolver, Udinia has introduced some of the street-smart flavours of India into his fire-cooked menu of high quality ingredients. For instance, his last menu included a lobster dish that captured the tangy fattiness of Mumbai’s chilli-cheese toast. Now, he wanted to create a new kind of lobster dish.

Both Udinia, and the restaurant’s owner, Sameer Sain, had grown up on Chicken Manchurian and loved the taste. Now, they wondered: could they take this relatively recently invented, humble flavour and serve it at an upmarket restaurant in Singapore? Would the Chinese, who constitute the bulk of Singapore’s population, be willing to splash out on a dish that (let’s be honest!) bastardised their cuisine?

They decided to take the risk. Udinia created a basic Manchurian gravy using Indian flavours with soya sauce. He fire-cooked high quality Australian rock lobster and cut the meat into chunks. It went back into the lobster shell along with the sauce. He put it on the menu with a certain amount of trepidation.

To his surprise, the dish was an instant hit, especially with Chinese guests who loved the desi Chinese flavour of Manchurian. It is now one of the restaurant’s hottest dishes, up there with Udinia’s re-invention of the Scotch Egg.

That the Chinese should love Lobster Manchurian tell us something about the power of flavours. In India, Chicken Manchurian and Gobi Manchurian can be junk dishes, lazily made by untrained chefs. That they remain so popular is a tribute to the power of the Manchurian flavour, invented in Mumbai in the 1970s. A great flavour combination will stand out even in badly-made dishes; it will shine in great dishes (like Revolver’s Lobster Manchurian); and it can translate across foods.

The food industry knows this. That’s why the makers of potato crisps, for instance, will use such flavours as Smokey Bacon or Cheese and Onion or Salt and Vinegar. They know how appealing a great flavour profile can be.

Seeing the success of Udinia’s Manchurian experiment, I began to wonder what the other great Indian flavours were. I spoke to Viraj Bahl of Veeba. Because Veeba is in the packaged sauce business, Viraj is always looking for flavour profiles that appeal across products. He told me that apart from Manchurian, Indians also loved Veeba’s ‘ Schezwan sauce’.

There is no such sauce in Sichuan, so this is another Indian-Chinese flavour innovation. It uses ginger, garlic, chilli and other Indian ingredients along with a little soya for the umami note. Use it for a stir fry, and you get a perfect Indian-Chinese dish each time.

Veeba also markets a range of tandoori-flavoured products. Anyone who tastes them will be instantly reminded of tandoori chicken. But what exactly is tandoori flavour and how do you capture it?

In the West, flavours often take the form of a synthetic molecule (say bacon). In India, it’s not that easy. Veeba created its ‘tandoori’ flavour sauces by using over 30 different natural herbs and spices, many drawn from the tandoori marinade, to convey the taste of ‘tandoori’.

The interesting thing for me was that all of the flavours we were talking about were not drawn from traditional Indian dishes but were relatively recent. Tandoori food only became popular in the 1950s and 1960s. Manchurian dates back to the 1970s and Schezwan is even more recent.

Even flavours that seemed to be traditional turned out to be recent. Take chaat masala which chefs will scatter over every dish these days. We now recognise the taste of chaat masala with its notes of aamchur and kaala namak.

But it doesn’t accord with the real chaat flavours that I remember. I spoke to Pinky Dixit who runs Soam, my favourite Mumbai restaurant and she confirmed what I had thought: chaat in Western India has no chaat masala at all. The flavour of bhelpuri for instance is too complex to be reduced to chaat masala.

So, where does the chaat masala flavour come from? Gunjan Goela, who has researched Delhi’s chaat tradition, says that chaat masala has only become popular in the last 50 years. Chaatwallahs in old Delhi used their own spice blends with their own distinctive flavours. Gautam Anand, who has spent his career as a hotelier understanding the food of India, reckons that chaat-masala is a relatively recent creation, made up by the packaged masala industry. In his early years at ITC hotels, he says, he never saw chaat masala in kitchens. When consultants and guest chefs came and asked for chaat masala, he says, ITC’s chefs were horrified.

But such is the ubiquity of chaat masala these days that it goes on anything and everything from salads to kababs. Some chefs will make their own equivalent of chaat masala. At the Maurya, Executive Chef Rajdeep Kapoor says, the kitchen makes two masalas daily which bear some resemblance to packaged chaat masala. But, for all practical purposes, chaat masala is a new flavour, made up around the same time as the Manchurian and Schezwan flavours.

Most of the Indian flavours we find in the West are also of recent origin. You will find many products in the UK that claim to be flavoured with Chicken Tikka Masala. The origins of Chicken Tikka Masala are in dispute. (The currently accepted view is that it was invented in Glasgow by a Punjabi chef before being embraced and adopted by the UK’s Bangladeshi owned curry places.) It was never meant to be the same as our Butter Chicken but over the years, it seems to me that the differences have narrowed.

It’s all made more complicated by the fact that both dishes have evolved from the time they were invented. Our Butter Chicken, which used to be a basic dish, now has cashew paste and many fancy spices.

Sameer Sehgal, who looks after food and beverage at the Leela Palace in Delhi, used to be a chef at London’s Dorchester Hotel. His sophisticated Butter Chicken, made like a smooth and polished veloute, went on the room service menu at the Dorchester. Sehgal says that to him, a good Butter Chicken is more a gravy dish while he likes a Chicken Tikka Masala that is more like a stir-fry, with an oomph that comes from the frying of the vegetables.

And yet, when you take the flavour profile and adapt it for say, a sauce or a potato crisp (as many have done), it is hard to tell the two dishes apart.

The great Cyrus Todiwala worked, in his early days in London, at a curry restaurant where, he says, the kitchen would make a basic curry for all dishes. The cooks would add a little tomato paste and Carnation evaporated milk to it to create the gravy for Chicken Tikka Masala. So how, he asks, do you define that recipe or develop its flavour profile?

Many Indian dishes in the UK are also hard to classify. For instance, one of the most popular curries in the UK is a vindaloo. The problem is that it tastes nothing like a Goan vindaloo. Todiwala, who is a master of Goan cuisine, says that a real vindaloo has an easily recognisable flavour profile (garlic, vinegar, chilli etc.) But in England, a vindaloo is just a hot curry. So, when they tell you that something is vindaloo-flavoured, what does that even mean?

All of which leads me to wonder: have we done better with Indian-Chinese than the Brits have done with British-Indian? As Saurabh Udinia’s success in Singapore demonstrates, the flavours we have created are strong, distinctive and capable of being translated across food items. British-Indian food on the other hand, hasn’t quite got there.

So yes, we have great cuisines perfected over centuries. But the genius of India is that we don’t sit tight. We don’t just cook our traditional dishes. We create new flavours all the time. And those flavours make our food a living, vibrant cuisine.

The views expressed by the columnist are personal

Connect with us on facebook.com/hindustantimesbrunch

Recipe: This Coffee Walnut Banana Bread will give the right kick to your morning

Mistakes to avoid while choosing a bridal lehenga