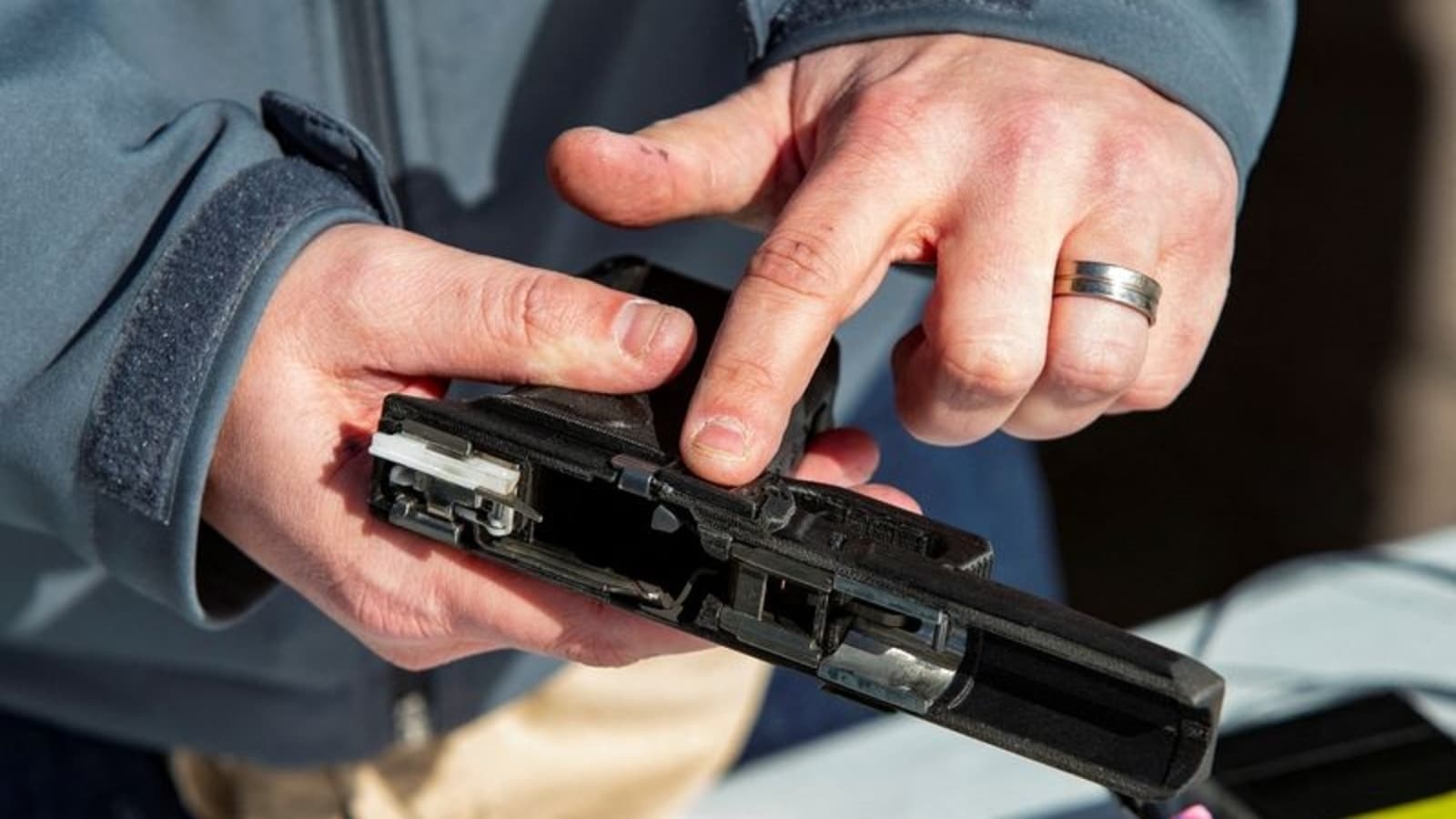 When shooters grip the gun with the hand wearing the special ring, a safety mechanism unlocks. SmartGunz, LodeStar have weapons, but will they work?

“Smart” guns designed to limit who can shoot them are poised to hit the booming US firearm market this year, taking aim at spiking gun deaths as federal lawmakers remain deadlocked on any new restrictions. Questions over reliability and political fights have bedeviled the technology for decades, but backers say it’s a chance to prevent children, criminals or people considering self-harm from pulling the trigger.

Yet whether the deadly weapons will be embraced by buyers, perform as intended in real-life, or deliver on their pledge to increase gun safety are questions that could be years from a definitive answer.

“I don’t have a crystal ball to know whether it’s going to be good on balance, bad on balance or ultimately like other smart guns in the past — kind of a dud,” said Adam Skaggs, chief counsel and policy director at gun control advocacy group Giffords.

The system from entrepreneur Tom Holland’s company SmartGunz uses RFID chips — similar to the emitters many people use in their car to pay tolls — installed inside rings.

When shooters grip the gun with the hand wearing the special ring, a safety mechanism unlocks, allowing the gun to fire.

Holland sees applications in protecting police officers who could have their pistol wrestled away by a suspect; or parents worried their kids could find their firearm.

“This is only about gun safety,” he told AFP. “For those consumers that want a ‘safer gun’…they can have access to this if they feel they have the need for lethal protection on their property.”

He expects his pistol, which he said is being tested by some police in the United States, to begin selling to civilians by April or May.

Any sales would arrive in an unprecedented context in the United States, where some 40 percent of adult Americans live in a gun-owning household, according to the Pew Research Center.

Firearms sales set a record in 2020, with nearly 23 million sold, according to the Small Arms Analytics & Forecasting consultancy.

Following racial justice protests and the onset of the the pandemic, the United States saw in 2020 its biggest rise in homicides since national records began in 1960 — though overall levels of killing remained below the 1990s.

The recurrent horror of America’s mass shootings provoke intense bursts of attention, but over half the roughly 40,000 annual firearms deaths are suicides.

Ginger Chandler, the co-founder of smart gun maker LodeStar Works, said the user authentication steps are a physical buffer against accidents, suicides and crimes — and a psychological barrier.

“In times of stress, somebody who is authorized is going to pick up the firearm but they have to do that (extra) step,” she said. “Maybe it makes them pause and go ‘Hey, do I really want to be doing this right now?'”

The 9 mm pistol her firm is developing, which it plans to have on the market by 2023, can unlock in three ways: fingerprint sensor, smartphone app or a keypad to enter a code.

These new entrants arrive after years of turbulence for “smart” weapons.

US firearms maker Smith & Wesson agreed with then president Bill Clinton’s administration in 2000 to make gun violence-reduction reforms that included developing smart guns, but the deal withered under a backlash from America’s powerful gun lobby.

A 2002 New Jersey state law that would have banned pistols without user-authentication technology sparked a furore — and was recast in 2019 to require state firearms shops to sell smart guns once they become commercially available.

Then came the case of the smart pistol developed by the German company Armatix – which was derided after a hacker showed in 2017 the safety technology could be defeated with magnets.

Also, while the smart gun concept has received support from gun control advocates, some experts point out that it’s still a deadly weapon.

“The whole smart gun argument ignores the most common way guns are used to kill in the US – suicide by the person who bought the gun,” Daniel Webster, director of the Johns Hopkins Center for Gun Policy and Research, told AFP in a statement.

Yet the technology has an appeal especially as political polarization appears to guarantee no new federal restrictions on guns in the near future.

LodeStar co-founder Gareth Glaser said the company has tried to stay out of the politics of gun rights, and their product seeks to avoid that debate too.

“It’s a workaround,” he said. “We would really rather the government stay out of it and allow the consumer to make the choice.”