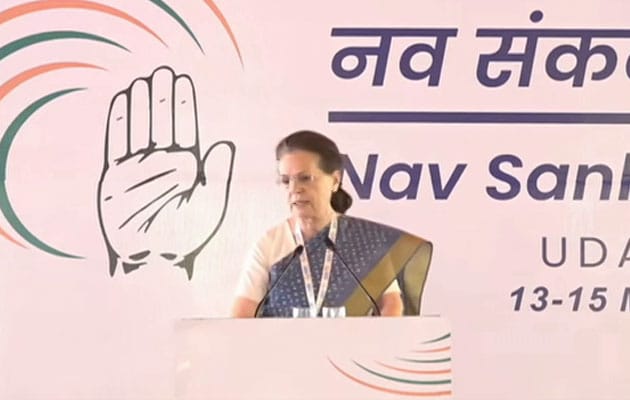 Sonia Gandhi said she felt like she had spent an evening with her family.

“We will overcome, we will overcome, we will overcome – that is our determination, that’s our Sankalp,” Congress working president Sonia Gandhi today said to a cheering audience at the Congress strategy meeting (Chintan Shivir) in Rajasthan’s Udaipur. Ending her short address to party members on a personal note, Ms Gandhi said she felt like she had spent an evening with her family during the last day of the grand old party’s brainstorming session when she got the opportunity to meet them.

On the outcome of the three-day conclave, she said detailed recommendations of the organisation will be worked on expeditiously.

The Congress on Sunday adopted a ‘Nav Sankalp’ — a road map for wide-ranging reforms in the party organisation to make it battle-ready for the next round of assembly and Lok Sabha polls.

“I feel it has been a very useful and productive Shivir. So many of you have had an opportunity to express your views and offer your suggestions in a spirit of constructive participation. I have received a summary of discussions in each of the six groups. They will inform our party positions, policies and programmes. They will also be of value to prepare manifestos for state and national elections. I want to make a special mention of the report of the organizational group since it is the most immediately relevant. Some of its ideas have formed part of the Udaipur NavSankalp Declaration that has just been adopted. I assure you that the detailed recommendations of the group will be acted upon expeditiously.”