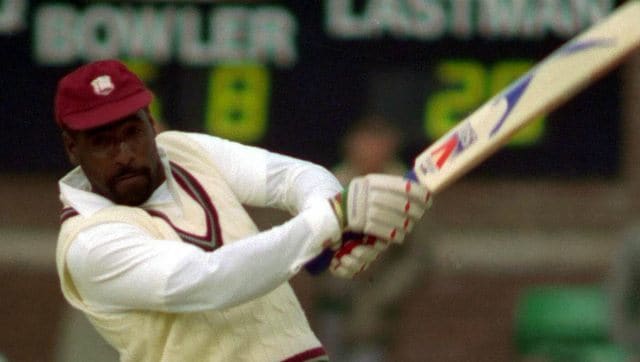 Richards and Jeff Dujon hit headlines many times with numerous blazing knocks, whereas Malcolm Marshall was popular for shattering stumps with his fiery pace

During their days, the presence of this trio who dominated the world of cricket in the 1980s was enough to put pressure on the opponents. The Caribbean are struggling to find such an amount of talent and class as their exit meant the end of the West Indies era in cricket. While Richards and Jeff Dujon hit headlines many times with numerous blazing knocks, Malcolm Marshall was popular for shattering stumps with his fiery pace.

However, the last appearance was not a joyous one for the Caribbean legends. They were already leading the series 2-1 and a draw was enough in the last game. But the batting collapse in the first innings cost the match for the visitors. Pacer Malcolm Marshall scalped two wickets in the match while wicketkeeper-batter Jeff Dujon took a couple of catches and recorded just 5 runs in both innings including a golden duck in the first. It was only Sir Viv Richards who lived up to his reputation even in his farewell innings.

Batting first, England posted a huge 419 runs on the board riding on Robin Smith’s 256-ball 109. Among other English batters, Huge Morris (44 off 130) and Chris Lewis (47* off 90) made notable contributions. In reply, the West Indies batting unit failed to stay longer on the crease except for opener Desmond Haynes who remained unbeaten till the last at 75. Skipper Viv Richards had demoted himself to no. 8 due to a headache but only managed to survive 7 deliveries adding just 2 runs to the score sheet. The Islanders’ innings concluded at 176 runs which led to a follow-on.

Following on, the top order played well for West Indies and put up a target of 143 runs in front of the hosts. Apart from Richie Richardson’s commendable 312-ball 121, Carl Hooper fetched a quickfire half-century scoring 54 runs in 89 deliveries. But the show-stealer was Viv Richards who was seen punishing the bowlers to every side of the field. He registered 60 runs facing 105 balls before making his way to the hut one last time. His final knock included 9 boundaries in total.

In the fourth innings, the job was quite easy for the English brigade. They breached the target losing only half of their players and ended the series in a 2-2 draw.