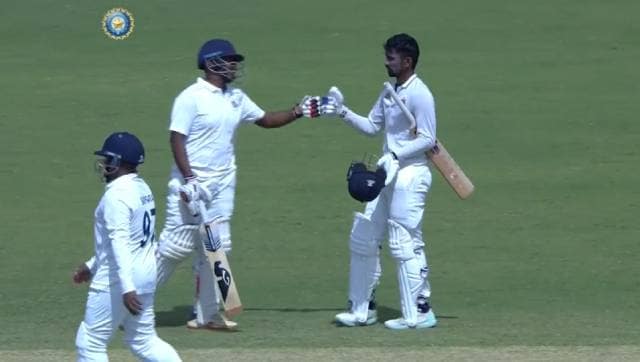 A fast-paced 125-ball 118 knock by Baba Indrajith gave South Zone a 48-run lead against West Zone as the southern side ended Day 2 of the Duleep Trophy final at 318/7 at stumps.

The 28-year-old right-hander shot 14 centuries during the course of his innings while getting helping hands from the likes of Manish Pandey (48) and Krishnappa Gowtham (43) down the order to take the score past West Zone’s first innings total of 270.

Pandey’s stand with Indrajith, in particular, came handy as the duo added 105 runs for the fourth wicket after the side was stuttering at 101/3 by the 27th over of their innings. The team’s captain Mayank Agarwal disappointed with a 9-run knock up the order while Hanuma Vihari scored just 25 at No. 3. The other opener, Rohan Kunnummal, contributed 31.

Indrajith and Pandey steered innings from thereon as the duo added 100 runs in just 20 overs with conditions turning more conducive for the batters. However, Pandey’s departure in the 48th over, by Tanush Kotian, triggered a mini-collapse down the order as South Zone lost three wickets in space of 36 runs. In that period, Indrajith and Ricky Bhui (4) were sent packing by senior pacer Jaydev Unadkat, who was also the pick among the bowlers with a spell of 3/52.

At 243/6, Gowtham’s 55-ball 43 took their total past West Zone’s as the left-handed all-rounded added 62-runs for the seventh wicket with Ravi Teja. Teja remained not out at 26 while tailender R Sai Kishore (6 not out) was at the other end.

Another West Zone bowler to make an impact on the day was Atit Sethi, who finished with a spell of 3/51.

Earlier in the day, Ajinkya Rahane and side were bundled out for 270 after resuming their day at 250/8. Unadkat, resuming at 39, couldn’t reach his half-century as he was stranded at 47 not out with Kotian (2) and Chintan Gaja (10) were sent back to the pavilion quickly.

Gaja was also the last wicket to fall while becoming Sai Kishore’s fifth victim as the experienced spinner finished with a figure of 5/86.