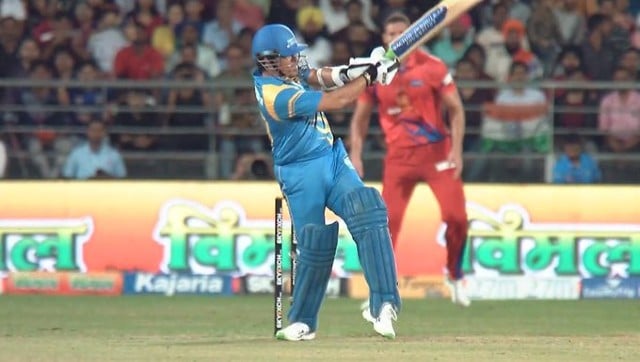 Sachin Tendulkar smashed 40 off just 20 balls. His knock consisted of 3 fours and 3 sixes and came at a strike rate of 200.

Legendary Indian batter Sachin Tendulkar once again showed that he is ‘God of cricket’ as he played a fiery innings for Indian Legends in the Road Safety World Series 2022 match against England Legends on Thursday in Dehradun.

49-year-old Tendulkar, who is leading Indian Legends, turned back the clock as he smashed 40 off just 20 balls to give his team a flying start after they were put in to bat first at Rajiv Gandhi International Cricket Stadium. His knock consisted of 3 fours and 3 sixes and came at a strike rate of 200.

Tendulkar opened his knock with a classy four off Stephen Parry through the backward square-leg region, but in the third over, the Master Blaster came out all guns blazing as he smashed fast bowler Chris Tremlett for two sixes, followed by a four.

In the process, Sachin also played a hook shot, which was a sight to behold for the fans.

Watch the highlights of Sachin’s innings:

With his brilliant innings, Sachin showed that class is permanent as even after 9 years since retiring from international cricket, the legendary batter is playing like he never hanged his boots.

However, Tendulkar failed to hit half-century as he fell prey to leggie Chris Schofield and gave a simple caught and bowled to him.

After Sachin departed, Suresh Raina and Yusuf Pathan continued the carnage with a 40-run stand as the latter was the aggressor, scoring 27 runs in the 11 balls he faced. Both batters fell in the same over but England Legends had Yuvraj Singh to deal with. The southpaw remained unbeaten on 31 off 15 balls as India Legends ended with a mammoth score of 170/5 in their 15 overs, with five overs being reduced from each innings after an extensive delay due to rain.