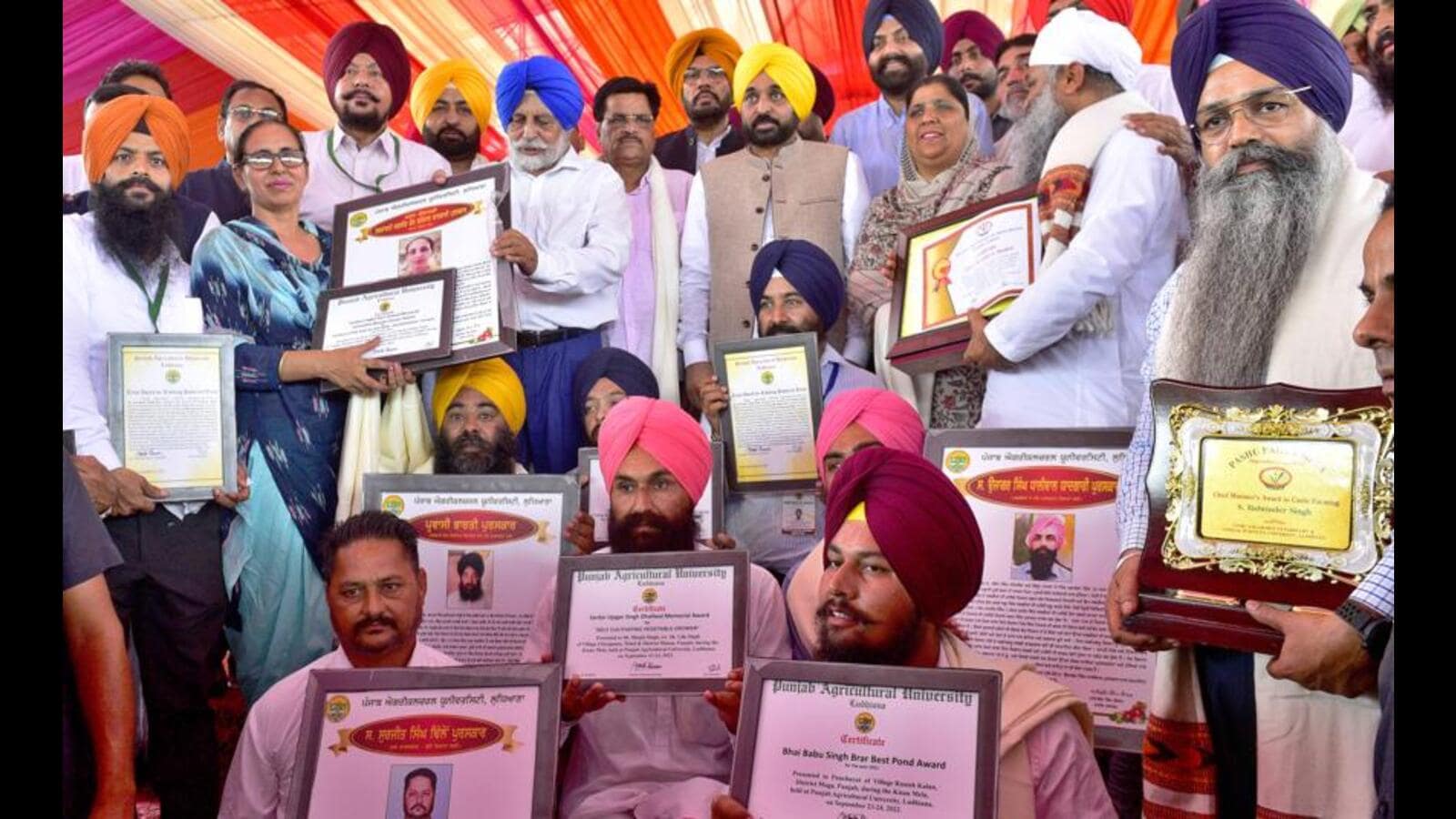 
Punjab Agricultural University (PAU) honoured five farmers on Friday, including a woman, on the first day of the kisan mela for excellence in agriculture and allied enterprises.

Satpal Singh Toor, a resident of Sawadi Kalan village, Ludhiana and Amritpal Singh Randhawa of Fuglana village, Hoshiarpur, were conferred with the “Parvasi Bharti Award” for their achievements in crop diversification.

Satpal’s father Bahadur Singh owned only five acres of land in 1995, but he has expanded his area of cultivation to 140 acres over the last 30 years. He grows potatoes on 120 acres and is into potato seed production as well. He also cultivates wheat, maize, menthe, berseem, moong and fodder crops. He conserves natural resources by using laser land levellers and never burns paddy straw, instead opting for its in-situ management.

Randhawa has pursued his MSc in horticulture from PAU and set up a plant where he processes raw turmeric into powder and a cold store (1,800 metric tonnes) for the storage of raw and ripe potatoes.

On his 54 acres of land, he cultivates pear, peach and plum (16 acres) as well as spring maize and moong. For irrigation, he uses a solar pump. He is also engaged in turmeric cultivation for which he uses vermi-compost, green manure, farm yard manure, neem oil and organic substances.

Satnam Singh, a resident of Burj Tharoar village, Bathinda, was honoured with the “Surjit Singh Dhillon Award” for scaling heights in agriculture as a small farmer. He practices scientific farming on 4.5 acres of land, of which he owns 2.5 acres and has taken two acres on lease. He has adopted sprinkler irrigation for water conservation and in-situ crop residue management technology for soil health enhancement.

Manjit Singh, a resident of Karanghana village, Mansa, received the “Sardar Ujaggar Singh Dhaliwal Memorial Award ” for excellence in vegetable cultivation. After completing his Class 12, he joined his ancestral profession of agriculture. Not satisfied with the wheat paddy monoculture, he started vegetable nursery raising with the help of the Krishi Vigyan Kendra in Mansa.

Presently, 38-year old Manjit is raising a vegetable nursery on 5 acres in addition to nursery production of paddy and kharif onion. He has motivated 10 youths of his village who are supporting him in onion cultivation and has set up an onion storage structure also.

She is involved in preservation of fruits and vegetables as well as bakery and confectionery and got the Progressive Farm Woman Award from KVK, Faridkot in March 2022. She also puts up exhibitions at various institutions and has received training from the directorate of extension education.

Dr Ashok Kumar, director of extension education, said that the progressive farmers were presented with plaques, citations and cash prizes.

In the cattle farming category, Balwinder Singh from Ranwan village, Ludhiana, was awarded. He started dairy farming in 2009 and now has 132 cows and the daily milk production at his farm is 15 quintals. One of his cows has a record of 58 litres milk production per day.

Jatinder Pal Singh from SBS Nagar, Pakhowal Road, Ludhiana, received the award in the poultry farming category. He started poultry farming in 2004 and now has 1.14 lakh birds and the daily production of eggs is 80,000.

In the category of value addition of livestock produce, Satnam Singh Sasrali from Basti Jodhewal, Ludhiana, was felicitated. He started with dairy processing in 2014 and he has obtained registration from FSSAI for milk products and has inked a memorandum of understanding with GADVASU. He owns 50 cows and 20 buffaloes with a total production of 13 quintals of milk per day.