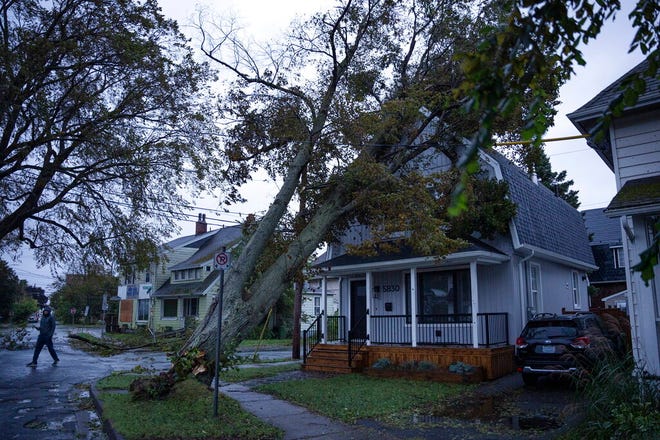 
Fiona, now a post-tropical cyclone after a destructive run as a hurricane, has already washed away homes, toppled trees and left thousands without power in Atlantic Canada after the storm made landfall early Saturday.

The Canadian Hurricane Centre called Fiona a “historic storm for eastern Canada” and a “potential landmark weather event” in a region where hurricanes are relatively rare. Many storms weaken when they reach colder waters.

Fiona is forecast to maintain hurricane-force winds until Saturday afternoon, according to the U.S. National Hurricane Center. It is expected to gradually weaken in the next few days.

Saturday morning, the center of Fiona was over the Gulf of St. Lawrence, about 200 miles northeast of Halifax, Nova Scotia. The storm had maximum sustained winds of 85 mph and was moving north at 23 mph.

Before passing through Bermuda on Friday, the storm devastated large swaths of the Caribbean, including Puerto Rico, the Dominican Republic, and the Turks and Caicos Islands. Officials in Bermuda reported no serious damage.

At least five people have died after Hurricane Fiona — two in Puerto Rico, two in the Dominican Republic and one in the French island of Guadeloupe.

PUERTO RICAN INDEPENDENCE:After Hurricane Fiona, will Puerto Rico ever become a state or an independent nation?

As Fiona ripped through Atlantic Canada, it washed away homes, toppled trees and power lines, and tore roofs off houses. There were no immediate reports of injuries.

Brian Button, mayor of the town of Channel-Port Aux Basques on the southern coast of Newfoundland, said houses were already being washed away by floodwaters, and residents were fleeing to higher grounds.

“I’m seeing homes in the ocean. I’m seeing rubble floating all over the place. It’s complete and utter destruction. There’s an apartment that is gone, that is literally just rubble,” said René J. Roy, a resident of Channel-Port Aux Basques and chief editor at Wreckhouse Press.

A woman in Channel-Port Aux Basques was rescued after being “tossed into the water as her home collapsed,” said Jolene Garland, a spokeswoman for the Royal Canadian Mounted Police in Newfoundland and Labrador.

Police in Charlottetown in Prince Edward Island reported downed trees and posted photos of the damage on Twitter, including one that shows the roof of a home collapsed.

Fiona made landfall in Canada early Saturday morning with sustained winds of up to 100 mph, the equivalent of a Category 2 hurricane, according to AccuWeather.

AccuWeather meteorologists forecast that Fiona may become “one of the strongest storms on record” in eastern Canada.

“This could be the storm of a lifetime for some people,” AccuWeather Chief Meteorologist Jonathan Porter said.

The storm is the “lowest pressured land falling storm on record in Canada,” according to the Canadian Hurricane Centre. Typically, the farther barometric pressure drops, the stronger the storm will be.

The storm is about the same size as post-tropical storm Dorian, which pounded Canada in 2019, said Bob Robichaud, warning preparedness meteorologist for the Canadian Hurricane Centre. But Fiona is expected to be stronger.

Half of Puerto Rico was still without power more than five days after Hurricane Fiona struck, and Puerto Ricans were growing frustrated with the island’s private electricity transmission and distribution company.

The situation was worsened by fuel disruptions that forced grocery stores, gas stations and other essential businesses to close.

Puerto Rico’s power grid was already struggling in the aftermath of Hurricane Maria, which razed the system in 2017.

HOW TO HELP:Mutual aid, nonprofits to support