‘Back at it’: Virat Kohli shares intense workout video ahead of Bangladesh tour 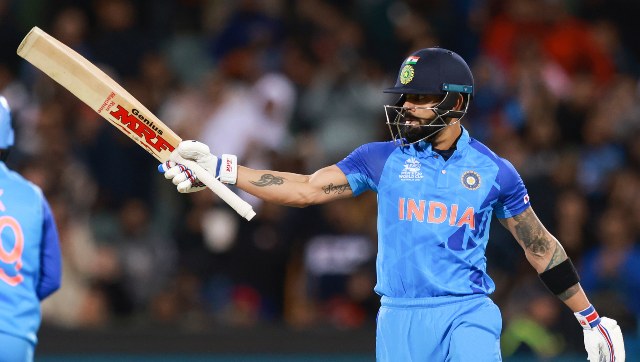 India were one of the top contenders for the T20 World Cup in Australia but failed to fulfil their dream of lifting the tournament trophy for the second time.

One positive to take away from the marquee event was Virat Kohli’s form. The star batter, who made a smashing comeback during the 2022 Asia Cup, continued his brilliant run at the T20 World Cup. Kohli emerged as the highest run-scorer in the competition, with 296 runs in six games.

While the right-handed batter has been rested for India’s ongoing tour of New Zealand, Kohli looks to be in no mood to take things slow. The ex-India skipper shared a video of his intense workout session ahead of the India-Bangladesh series.

In the video, Kohli can be seen running on a treadmill and strengthening his back muscles on the cable machine. The star batter captioned the clip: “Back at it”. He also used the hashtag VKCAM, indicating that it was a self-shot video.

Kohli seems to be in no mood for slacking off as this clip indicates. Since his return to form, the star batter is keen to ensure that he remains at the top of his game.

In Australia, Kohli proved that he is still one of the greatest batters of the era from the first fixture itself, when he scored 82 against Pakistan in a high-pressure situation. His innings was pivotal in India’s victory over their arch-rivals.

The star batter followed it up with half centuries against Netherlands, Bangladesh and England. Unfortunately, India were knocked out of the World Cup after a 10-wicket loss against the Joss Buttler-led unit.

Following the defeat, Virat Kohli had posted a long note on Instagram talking about his experience of playing in the T20 World Cup. In the note, he acknowledged his disappointment at not winning the tournament, and thanked his fans for their support.

“We leave Australian shores short of achieving our dream and with disappointment in our hearts but we can take back a lot of memorable moments as a group and aim to get better from here on. Thank you to all our fans who turned up in huge numbers throughout to support us in the stadiums. Always feel proud to wear this jersey and represent our country,” Kohli wrote.