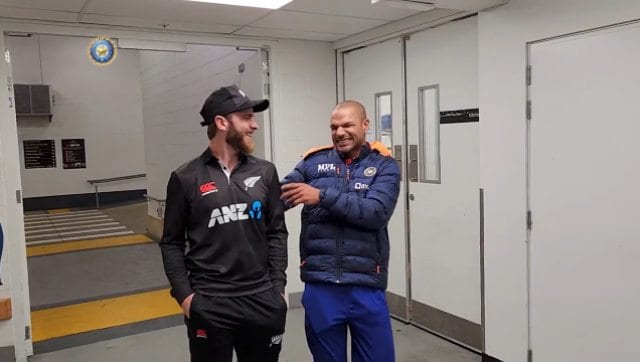 Team India triumphed 1-0 against New Zealand in the rain-spoiled three-match T20 International series. Now, the Men in Blue, under the leadership of Shikhar Dhawan, are all set to play a three-match One Day International series. Ahead of the first match slated to take place on 25 November, captains of both sides, Dhawan and Kane Williamson enjoyed some friendly banter as they met at Auckland’s Eden Park to pose with the ODI trophy.

The official Instagram page of the Indian Cricket Team has shared some glimpses of the well-spent day.

In the clip, Dhawan and Williamson can be seen exchanging casual chats with wide smiles on their faces. After spending time in the dressing room, they snapped pictures together with the trophy at the stands donning their national kits.

The duo shares a good bonding with each other thanks to the Indian Premier League (IPL). The pair have played some crucial knocks together on many victorious occasions during their stint with Sunrisers Hyderabad. The 176-run stand stitched by these two against Delhi Daredevils in the 2018 edition is still considered one of the best ones in the cash-rich tournament.

However, Dhawan joined the Punjab Kings ahead of the 2022 season and has also been named the captain of the side for the upcoming edition. On the other side, the Hyderabad-based franchise recently released Williamson and they are looking for a new skipper.

Coming to the video, since being dropped on the internet, it has garnered more than 4.5 lakh likes. The Indian fans wished luck to India’s interim captain. Notably, Dhawan has been quite comfortable in leading the side in 50-over cricket and the recent results reflected it.

Earlier this year, when Rohit Sharma was rested, the Indian brigade, steered by Dhawan, recorded two commendable ODI series wins against West Indies and South Africa respectively. Thus, the fans are hoping for a positive outcome this time against the Black Caps.

A captain feels a lot of pressure since modern cricket has moved toward a result-oriented structure. However, Dhawan asserted he wouldn’t worry too much about the outcome. While speaking to the reporters ahead of the series, the opening batter stated, “I’ll simply play the game in line with our team’s objectives, as well as what the side demands and requires.”