Why are Spanish players not singing their national anthem? Spain’s players stand for the national anthem during the Qatar 2022 World Cup Group E football match between Spain and Costa Rica at the Al-Thumama Stadium in Doha. AFP

It was a match that all football fans were waiting for as the FIFA World Cup 2022 began — Spain vs Costa Rica. As the two countries lined up and stood shoulder-to-shoulder for their national anthem at the Al Thumama Stadium in Doha before play started, fans were treated to a strange visual.

The ‘La Furia Roja’ or ‘Red Fury’, as the Spanish football team is called, stood tall and swayed awkwardly without singing their national anthem. No, it wasn’t a form of protest — like the Iranians did in their match against England — but because the anthem, Marcha Real, has no words to it.

Here is all you need to know about Spain’s national anthem and why the Spanish footballers don’t sing along.

The Marcha Real is one of the few patriotic songs with no lyrics at all. With this, Spain enters the no-lyric national anthem club — joining only three other countries, Bosnia and Herzegovina, Kosovo and San Marino.

It has its origins in an 18th Century song known as the Marcha de Granaderos or March of the Grenadiers, which appeared for the first time in 1761, in a book of Military Marches of the Spanish Infantry written by Espinosa de los Monteros. The tune itself was a popular number among the Spanish people and it was eventually declared a March of Honor by Charles III in 1770.

It was in 1874 during the reign of Isobel II that La Marcha Granadera (The Grenadier March) was adopted as the official Spanish national anthem for the first time.

As time progressed, it became more popular and today’s version of the anthem — a sixteen-bar long phrase — was harmonised by Bartolomé Pérez Casas, head musician of the Royal Corps of Alabarderos Guards.

There are six different official adaptations of the national anthem, for each arrangement and length. One is reserved for the King, the other is performed for the Government of Spain or sporting events such as FIFA World Cup and there are other arrangements for the military. 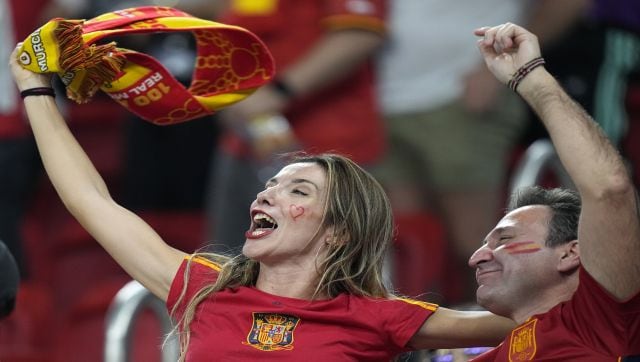 Putting words to the song

While the Marcha Real has no official lyrics, that’s not always been the case.

Over the years, there have been a number of attempts to come up with words for the anthem. The first major attempt was in 1870, by General Juan Prim, the Spanish military leader and political figure who played an important role in the Revolution of 1868.

At his prompting Spanish officials commissioned a contest for both musicians and poets to put lyrics to the hymn. However, the competition failed to produce a winner, with the judges failing to reach a consensus on any of the entries. The March of the Grenadiers was left without a set of lyrics.

Later, another attempt was made during the reign of Alfonso XIII (1886-1931). A version created by Eduardo Marquina with three lyrics titled Flag of Spain, Spain Guiding, and Long live Spain! was used.

During the dictatorship of General Francisco Franco, the head of the Spanish government from 1939 to 1975, lyrics written by a poet, José María Pemán were employed. But once he was removed from power, the lyrics were taken out of the national anthem in 1978 because of their association with Franco and the extreme right-wing ideology that it reflected.

In 2007, another attempt was made to add lyrics to the anthem. The Spanish Olympic Committee (COE) set up a competition to find a writer for a set of lyrics for the Spanish anthem. This time there was even a winner. Paulino Cubero, from Ciudad Real, was commissioned to write the text.

The lyrics went something like this: “Long live Spain! Let’s all sing together with different voices and one heart. Long live Spain! From the green valleys to the immense sea, a hymn of brotherhood, Love the Homeland because it knows how to embrace, under its blue sky, all the peoples in freedom. Glory to the children who give justice and greatness to history, democracy and peace.”

However, these lyrics were vociferously criticised and the words never came to life.

Interestingly, this isn’t the first time that the matter of players not singing the anthem during the World Cup has been raised.

When World Cup fever took over in the summer of 2018, a wildly amusing Twitterstorm broke out in the run-up to Spain’s game against Iran on 20 June. It seemed some netizens took offence at Spain’s players ‘refusing’ to sing along to the wordless anthem.

#WorldCup Seriously can’t believe the Spain players, refusing to sing their national anthem for the second match in a row #ESP #IRNESP

So, keep an eye out for Spain’s next match, which is against Germany, and see the La Furia Roja humming to the anthem.

With inputs from agencies

- Advertisement -
Share
Facebook
Twitter
Pinterest
WhatsApp
Copy URL
Previous article
Nanku:I did not want people to overlook my hard work
Next article
Video Of A Cow Waiting For Its Owner To Take It Home Goes Viral